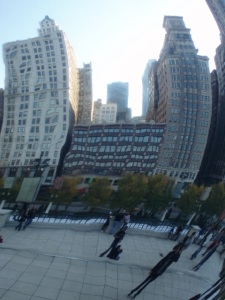 Buildings reflected in 'The Bean' in Millennium Park, Chicago

So, I’m back from Chicago, though I’m trying my hardest to pretend I’m still there. Last week was, without any doubt, one of the most incredible experiences of my life so far. I’m still digesting, thinking about the best way to convey just how powerful it was. I’ve been walking around smiling, like a person who’s just fallen in love. And this love is going to last a long time… for the city, for the people I met there and for the work that’s going on at Oak Park & River Forest High School, through poet and educator Peter Kahn and his Spoken Word Club.

I’m beginning to write about my experiences through poems (which aren’t ready to be public yet) and on the SLAM in Chicago blog (which I’ll be contributing to more as the week goes on). I planned to keep a steady diary while I was out there, but there was so much going on that what I have is more of a map of the trip, with some diary entries, notes, lesson plans, poems, feedback notes for students and Peter’s hand-drawn attempt at explaining the Chicago grid system to me (I’ll make sure that image appears soon). I’ll be back with more. Still thinking.